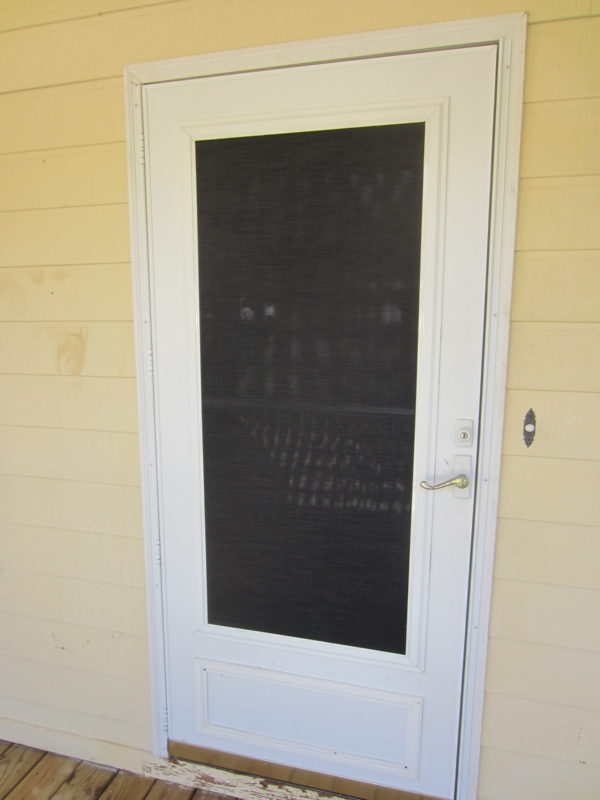 Solar Screens for storm doors, how do they install?

Or the solar screen can attach with screws, to the trim that goes around the glass.

How it would attach would be by screwing it with four small self-tapping screws on to the trim around the glass or the metal door itself.

When I install a screen this way, I just direct screw it anywhere I can that looks good and does not involve getting near the glass.

Some storm doors allow for a full-size solar screen to fit into it, while others do not.

By way of the following picture, you can see how the solar screen fits over the trim that goes around the glass onto the storm door. The solar screen attaches by means of a handful of small screws.

This storm door did not allow for a full-sized screen to sit within it. To attach solar screens to storm doors like this, you have to surface install them with screws, as shown here. To keep the fabric tight, so the screen look good, I like to put 3 screws into each leg side of the frame. I like to put a screw 4-6″ from the top, one 4-6″ from the bottom to hold the corners. Then put the center screws in. When putting the center screws in, I’ll put the first one in, then pull the opposing sides frame to make the fabric nice and tight, then put the last center screw in.

I was able to screw in most of this solar screen to the storm door except for the left side. For the upper, bottom, and right sides of the screen, I had enough overlap. I was able to have enough overlap that allowed me to put my screws outside of where the glass or operations of the window would be. But for the left side of the screen, if I was to put a screw through the solar screen framing, that would have put me too close to the glass. So because of this, I put the screws to the left of the solar screen framing. I put them to the left and used casement clips to hold the screen. I put multiple casement clips all around the handle for sturdiness.

The key is when I adhere a solar screen to a storm door, I want it to stay attached. That storm door opens and closes, has a lot of movement. The wind can slam it open and closed forcefully. This being the case, you really need to make sure like I did that the screen will stay attached long term.